Eathquake in VA had a big reach!

While working I got an email from a friend of ours in Lenoir, NC.

They had just had to stand in the doorway while debating to save a family heirloom clock as it teetered on the brink of falling. Books were tipping and items shaking on the shelves. Thankfully these friends knew what they were experiencing (they’d lived out West long enough)…but here on the East Coast, an earthquake of this magnitude? 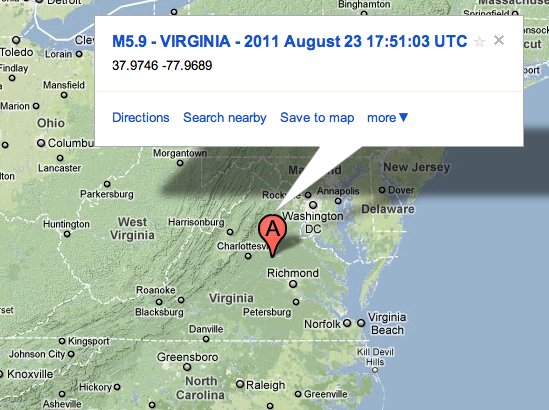 A 5.9 magnitude earthquake centered in Virginia shook much of Washington, D.C., and was felt as far north as New York City. The quake sent hundreds of people spilling into the street a block from the White House, with other buildings evacuated in North Carolina.

The U.S. Geological Survey said the earthquake was 3.7 miles (6 kilometers) deep. Shaking was felt at the White House and all over the East Coast, as far south as Chapel Hill, North Carolina and as far north as Rhode Island. Parts of the Pentagon, White House and Capitol were evacuated.

Try covering a little more west in NC and you’ve got a bigger picture of where the quake was felt. How far reaching the shaking was from the epicenter. If someone does not know where Lenoir, NC is – judge on this map by Hickory NC and you can see the circumference of the earthquakes effects.

1 As Messiah left the Temple and was going away, his disciples came and called his attention to its buildings.

2 But he answered them, “You see all these? Yes! I tell you, they will be totally destroyed — not a single stone will be left standing!”

3 When he was sitting on the Mount of Olives, the disciples came to him privately. “Tell us,” they said, “when will these things happen? And what will be the sign that you are returning, and that this present time is ending?”

4 Messiah replied: “Watch out! Don’t let anyone fool you!

5 For many will come in my name, saying, `I am the Messiah!’ and they will lead many astray.

6 You will hear the noise of wars nearby and the news of wars far off; see to it that you don’t become frightened. Such things must happen, but the end is yet to come.

8 all this is but the beginning of the `birth pains.’

9 At that time you will be arrested and handed over to be punished and put to death, and all peoples will hate you because of me.

10 At that time many will be trapped into betraying and hating each other,

11 many false prophets will appear and fool many people;

12 and many people’s love will grow cold because of increased distance from The Instructions of Adonai.

13 But whoever holds out till the end will be delivered.

14 And this Good News about the Kingdom will be announced throughout the whole world as a witness to all the nations. It is then that the end will come.